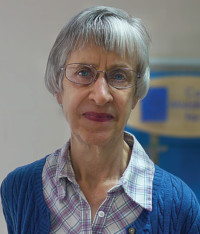 Elaine A. Giermak (1995), a teacher of English and wife of Frank Hoss (1960), died of injuries from an automobile crash in Urbana, Illinois, on April 20. She was 75. She was a cherished sixth-grade teacher at Campus Middle School for Girls in Urbana, part of a distinguished 50-year career at middle and high schools, and community colleges. A graduate of Northern Illinois University and of the University of Chicago with a master’s degree in English, she returned to the University to study in the Divinity School as a Disciples Divinity House scholar in 1995. Elaine and Frank partnered in the ministry at Hope United Church of Christ near Armstrong, Illinois. They shared a love of travel and learning. She is survived by her husband, her sisters, Janice Reisch and Cathie (Mike) Todnem, and nieces and nephews. More here. 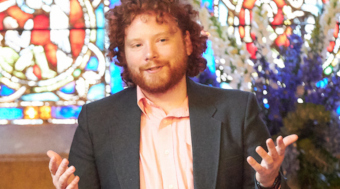 Jack Veatch (2019) is now the Minister of the Evergreen, Colorado, Christian Church. He completed studies in Bossey, Switzerland, at the Ecumenical Institute of the World Council of Churches in January 2020, where he was supported by a scholarship from the Council on Christian Unity of the Christian Church (Disciples of Christ) and as the W. Barnett Blakemore Scholar of the Disciples Divinity House. 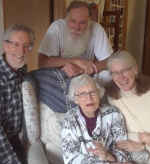 Sympathy to Ana Gobledale (1975) and to her siblings Eric and Dan Dale, on the death of their mother, Dotty Dale, on March 10 in Bellingham, Washington. Sympathy also to Dotty's granddaughter, Thandiwe Dale-Ferguson (2009) and other extended family. A service will be held at Bellingham First Congregational UCC on July 19.

Adelle E. Lemon, widow of Robert L. Lemon (1944), died March 7 in California. She was 92. Adelle Ringstrom married Robert Lemon in 1950. He had been ordained in 1948 after receiving the BD degree from the University of Chicago Divinity School as a Disciples Divinity House Scholar. They raised four children, David, Nancy, Mary, and John, who survive them, and became life partners in working for justice and peace.

The Lemons eventually located in Berkeley, California. In the 1970s, Ms. Lemon became the founder and director of Bonita House, a community day care center for adults suffering from mental illness. In 2003, they were honored with the Disciples Peace Fellowship's Witt Wittcamper Award, which recognized lifetime commitment to peace and justice. In 2007, they received the Northern California region's Martin Luther King Jr. Award. Robert Lemon died in 2007; after his death, Adelle Lemon continued supporting causes of justice and peace as well as the Disciples Divinity House. A memorial service will be planned for May in the Berkeley area.

Sympathy to the family of Marilyn Jean Cook Partin, widow of Harry B. Partin (1947). She died peacefully at home in Durham, North Carolina on February 26. She was 95. Born in Davenport, Iowa, on May 25, 1924, she graduated from the Baptist Missionary Training School in Chicago in 1948. She married Harry Partin, a student at the Disciples Divinity House and the University of Chicago, in 1949. They lived in Chicago, California, England, and Switzerland, where he served with the World Council of Churches, before moving to Durham in 1964, when he joined the faculty at Duke University to teach History of Religions. He died in 2008.

Ms. Partin earned a Masters in Social Work at the University of North Carolina at Chapel Hill in 1973. She served as the Director of Volunteers and Resources for the Durham County Department of Social Services for 20 years, retiring in 1995. Affectionately known as "Cookie," she was a tireless advocate for families in crisis, the elderly, the homeless, the mentally ill, and countless others in distress. She shaped many programs, including the Emergency Energy Fund, Retired Seniors Volunteer Program (RSVP), the Elder Neighbor/Elder Advocacy Program, and Share Your Christmas. After her husband's death, she wrote a memoir, Alone, Not Alone.

She is survived by three children, Ruth, Emily, and William, their spouses, two granddaughters, and other family. A memorial service will be held March 7 at Pilgrim United Church of Christ in Durham, where she was a member for over fifty years, and where Melinda K. Wood, DDH alumna and trustee, is now the senior minister. More here. 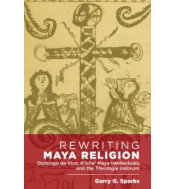 A new book by Garry Sparks (2001), Rewriting Maya Religion: Domingo de Vico, K’iche’ Maya Intellectuals, and the Theologia Indorum, has been published by the University Press of Colorado. "Sparks traces how the first Dominican missionaries to the Maya repurposed native religious ideas, myths, and rhetoric in their efforts to translate a Christianity and how, in this wake, K’iche’ Maya elites began to write their own religious texts, like the Popol Vuh. This ethnohistory of religion critically reexamines the role and value of indigenous authority during the early decades of first contact between a Native American people and Christian missionaries."

He was recently awarded an American Academy of Religion Collaborative International Research Grant for 2020. The grant is intended to support generative research collaborations between and among scholars located in different geographical regions who wish to pursue focused, joint projects in any area of the study of religion. More here. 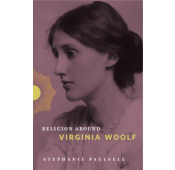 Stephanie Paulsell's (1985) new book, Religion Around Virginia Woolf, has been published by Pennsylvania State University Press. "Paulsell examines the ideas about God that hover around Woolf’s writings and in the minds of her characters. She also considers how Woolf, drawing from religious language and themes in her novels and in her reflections on the practices of reading and writing, created a literature that did, and continues to do, a particular kind of religious work." Here's a video of a discussion with the author.

Congratulations to House Scholar Andrew Packman, who successfully completed his midpoint review for his dissertation on December 17. The dissertation takes up questions of moral motivation, affectivity, and the recalcitrance of American racism.

Congratulations to Jonathan Cahill (2015) and Kristina Walter who were married on November 15 in Ohio. Cynthia Lindner (1978) officiated the wedding.