Effective December 1, 2020, Yvonne Gilmore became the Interim Administrative Secretary of the National Convocation of the Christian Church (Disciples of Christ) (NCCC) and the National Christian Missionary Convention (NCMC), and Associate General Minister and President for a two-year period. She is charged with providing the leadership, management, and vision necessary to undergird the ministries of the NCCC and the NCMC, which are historic organizations of Black Disciples.

She served as DDH's Associate Dean for seven years, beginning in fall 2013. As Associate Dean, she furthered the educational work of the Disciples Divinity House and interpreted that work to key constituencies in ways that support DDH's mission over the long term. This involved fostering educational opportunities, vocational development, and transformative conversation among current students, alumni/ae, and friends as well as in wider venues. 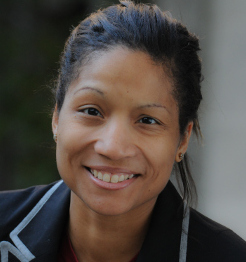 "Profound scholarship, service, and creativity abound at the Disciples Divinity House," she notes. "In concert with a great cloud of witnesses and a vast array of faithful and disciplined stewards of God's grace in its midst, I am excited to be part of a grand constellation."

Yvonne Gilmore is committed to the preparation of "thought leaders," and her ministry exemplifies such leadership. In 2007, she became the founding pastor of New Song Community Church, a diverse urban congregation in Northeast Columbus, Ohio, that was dually aligned with the Christian Church (Disciples of Christ) and the United Church of Christ. From 2010-13, she served also as staff chaplain and decedent care coordinator for Mount Carmel West Hospital in Columbus. She previously served in the Capital Area Region as an interim pastor, associate pastor, and a chaplain.

She is in demand as a speaker and preacher and as an anti-racism trainer with Reconciliation Ministry. She has team-taught in the Divinity School's Arts of Ministry sequence, and she is a member of the Board of Directors of Higher Education and Leadership Ministries (HELM) and former member of the General Board of the Christian Church (Disciples of Christ).

Yvonne Gilmore is also a poet and a spoken word artist.  She has preached, lectured, and/or performed at varied educational institutions and denominational events, including the University of Chicago, Louisville Presbyterian Seminary, Christian Theological Seminary, McCormick Theological Seminary, and, within the Christian Church (Disciples of Christ), at the Ohio Regional Assembly, the National Convocation, and the General Assembly. As a member of the Cornel West Theory, she has performed in a number of venues, including on college and university campuses and she been interviewed on the radio.

A member of the 2001 entering class of Disciples Divinity House Scholars, she is a 2005 MDiv graduate of the University of Chicago Divinity School. She also holds a BA in International Relations from The American University. She has two daughters, Assata and Kharis.