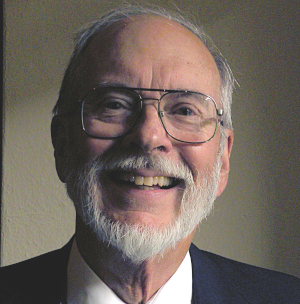 Lawrence Del Butterfield, who served as a trustee for thirty-five years, died on September 25 in Florida. We give thanks for his gifts of leadership and friendship, richly shared with the Disciples Divinity House, and for a life dedicated to making things work.

Born in 1937, Del Butterfield studied at the University of Florida, where he earned BSE and MSE in the emerging field of nuclear engineering. He accepted a position with Commonwealth Edison in Illinois, and eventually became Director of State Nuclear Programs. Later he moved into personnel administration. He met Ann Baringer while they were students at the University of Florida. They married in 1958 and raised two children, Lawrence and Susan. After retirement, they built a house in Desoto, Wisconsin, that overlooked the Mississippi River; they called it “Winemakers’ Bluff” after its location and Del’s hobby. He also worked in the hardware store and served the village as its president.

Mr. Butterfield, who was a member of First Christian Church of Downers Grove, joined the Board of Trustees in 1974 at the invitation of Dean Blakemore. Over the next decades and until 2009, he gave crucial leadership to the Board, working also with Deans Browning, Gilpin, and Culp. He served as Secretary of the Board, Assistant Treasurer, member of the Finance Committee, and with particular excellence, as chair of the House Committee. He was generous with his time and attention, strengthening the Board's work in wide range of matters from personnel, investments, the complete renovation of the kitchen and dining room, the refurbishment of the chapel and its pipe organ, to the minutiae of making things work.

In 2005, the Butterfields established the Baringer-Butterfield Fund through the Christian Church Foundation with a charitable gift annuity to benefit DDH. The fund’s name remembers that Ann Baringer Butterfield was the last in a line of Baringers. Her father, William E. Baringer, was a scholar of Abraham Lincoln, and Ann herself served as the lead interpreter for the Naper Settlement living history farm in Naperville, Illinois. Ann Butterfield died in 2007. Del Butterfield is survived by second wife, Lois, whom he married in 2009, his children and their partners, and two grandchildren.