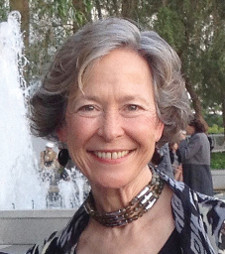 Alumna and former President of the Board of Trustees, Amy A. Northcutt, passed away peacefully on May 6, 2017. She was 57. She was diagnosed on April 27 with a brain tumor. She died from complications related to the tumor. Amy is survived by her husband, Craig Middlebrook, of Falls Church, Virginia, and their children, Henry (17) and Ella Bo Lei Middlebrook (13). She is also survived by her sisters, Nancy Trench (Winston) of Stillwater, Oklahoma, and Kay Lynn Northcutt, the writer, a Disciples minister, and DDH alumna, of Santa Fe, New Mexico. Amy was preceded in death by her parents, Clinton and Thelma Vaden Northcutt.

Ms. Northcutt was serving as Chief Information Officer of the National Science Foundation (NSF) at the time of her death. She was named to the office in January 2012, and had responsibility for NSF's information technology investments, governance, policy, and planning. “She enacted a continuous Information Technology modernization approach which has brought innumerable advances to our day-to-day lives,” NSF Director France Córdova said. “These contributions will impact and improve NSF’s business operations for years to come.” She was recognized by FedScoop as one of the "Top Women in Tech 2017".

She had held positions at NSF as Acting Office Head, Information and Resource Management and, from 2001-2011, as Deputy General Counsel. Prior to NSF, Ms. Northcutt was the Vice President for Administration of Wesley Theological Seminary in Washington, DC, and the Chief Executive Officer of the Interstate Commerce Commission. Before moving to Washington, DC, in 1991, she practiced law at Crowe and Dunlevy in Oklahoma City. She was a member of the Oklahoma Bar Association. She served on numerous boards of directors and received many awards and recognitions throughout her career. Most recently she served as a Director for the In Trust Center for Theological Schools as well as the Worldwide Assurance for Employees of Public Agencies.

In 1993, Ms. Northcutt became a member of DDH’s Board of Trustees, serving until December 2010. She served as its president from 1999-2005. During her presidency, the Board grappled with accelerating tuition costs and significant capital expenditures; over $2 million was added to the endowment. The long range planning process clarified the work of the House and of its Board, and the Board evolved to a new model of work that incorporated study and fostered a “think tank” approach. She was the first woman to serve as president. We counted on her warmth and intelligence, on her ability to plan and lead, and on her love of the House and commitment to its mission.

Amy Northcutt was a person of strong and committed faith. In Washington, DC, she attended the Lutheran Church of the Reformation, where she served as Council President. She knew herself to be a beloved child of God, and she gratefully opened her heart and home freely to all, particularly those in need. She was an organ donor.

Her life was celebrated at a memorial service at the Lutheran Church of the Reformation in Washington, DC, on June 17. In lieu of flowers, the family asks that donations be made to create a scholarship in Amy’s memory to support women pursuing theological studies. Donations can be made to the Amy A. Northcutt Fund, checks payable to "The Disciples Divinity House" at 1156 East 57th Street, Chicago, Illinois, 60637-1536, or online.