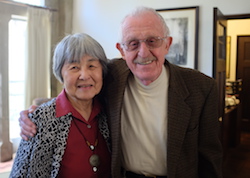 JoAnne H. Kagiwada and Clark M. Williamson have been named Honorary Co-Chairs for DDH’s 125th Anniversary Celebration. The celebration will be held May 24-26, 2019, Memorial Day weekend, in Chicago.

As honorary co-chairs, Ms. Kagiwada and Mr. Williamson will preside over a weekend filled with special events. The 125th Celebration will feature a DDH StoryHour, lectures and discussion, music and worship, a gala dinner at the Quadrangle Club, preaching by Teresa Hord Owens, the second annual Amy Northcutt Lecture, food, festivity, and time to explore the University and the neighborhood.

JoAnne Hirasuna Kagiwada is currently the longest serving member of the Board of Trustees, having first been elected in 1984. A graduate of UC Berkeley Law (Boalt Hall), her distinguished career has focused on non-profit organizations. As Executive Director of the Legislative Education Committee of the Japanese American Citizens’ League, she helped to ensure passage of a $1.25 billion redress program on behalf of Americans of Japanese ancestry who were unconstitutionally deprived of their civil liberties and incarcerated in concentration camps by the US government during World War II. From 1978-88, she was Director of International Affairs for the Christian Church. She has served on numerous nonprofit boards, including as a vice president of the National Council of Churches.

Ms. Kagiwada first came to know the Disciples Divinity House through her husband, David Tamotsu Kagiwada, an alumnus and 1954 BD graduate of the Divinity School. Pastor of Crestview Christian Church in Indianapolis at the time of his death in 1985, David Kagiwada was perhaps best known for leading Disciples of diverse and historically antagonistic Asian cultures into the formation of the American Asian Disciples (now NAPAD). In 1995, JoAnne Kagiwada created the David T. and JoAnne H. Kagiwada Fund at DDH.

Clark M. Williamson is the Indiana Professor of Christian Thought Emeritus at Christian Theological Seminary, and a BD and PhD alumnus of the Disciples Divinity House and the Divinity School. A pioneering architect of post-Holocaust Christian theology, he is an impassioned advocate for theology that is intellectually credible, morally plausible, and consistent with love of God and neighbor.

He has said that “the purpose of Christian theology is to bring the church to self-understanding and self-criticism,” and those purposes find compelling expression in two of his most acclaimed books, A Guest in the House of Israel: Post-Holocaust Church Theology, and Way of Blessing, Way of Life: A Christian Theology.