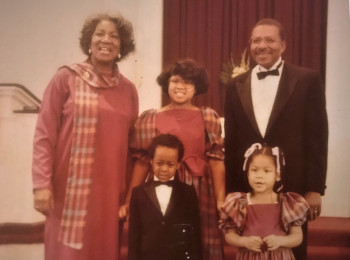 A new fund will honor Teresa M. Gilmore, music educator and grandmother of Yvonne T. Gilmore. By creating the fund, the Gilmore family pays tribute to her life and to the enduring power of sacred music, arts innovation, and courageous congregations. The Gilmore family also celebrates the 125th anniversary of the Disciples Divinity House, an institution to which they were first connected through her.

Teresa Marlene Gilmore (1933-2010) grew up in Coffeyville, Kansas, and attended the University of Kansas, receiving a Bachelor’s degree in Music Education in 1955. In 1956, she married Wilfred Gilmore and moved to Sioux City, Iowa, where Mr. Gilmore was serving in the Air Force; they finally relocated to Washington, DC. Soon after her arrival in DC, she met Arthur A. Azlein, a pastor who was introducing himself door-to-door in their neighborhood, and joined the new Michigan Park Christian Church. Azlein, a DDH alumnus, was a fellow Kansan. She was among the first African-American members of the congregation, and became the choir director for the senior choir and a member of the Christian Women’s Fellowship.

A pillar of music education and arts innovation, she was a music teacher in the DC Public School System for over thirty years. She co-directed the Region V Children’s Chorus, which performed throughout the DC metro area and at the 1984 World Exposition in New Orleans. Her passion for music and education converged at Michigan Park, where she steadfastly built the ministry of music for several decades. Some of the students that she mentored in the public schools joined the music ministry of Michigan Park and went on to become accomplished composers and musicians. These included Nolan Williams, who became the music editor of the African American Heritage Hymnal, a publication for which she served on the editorial committee.

She raised three children, Pamela (Steve Washington), David (Margo Gilmore), and Kesha Gilmore (Mark Rich), and, in time, grandchildren and great-grandchildren. Yvonne recalls, “When I gave birth to my youngest daughter, my grandmother shifted her retirement and came to live with me, making space on her journey to help with Assata, then a preschooler, while I pursued my MDiv, and later to care for my second daughter, Kharis.”

The final lines of a poem that Yvonne Gilmore composed after her grandmother’s death explain, She was a church charter of the gospel of better not more, better living not more stuff, better eating not more food, better rising for we are all phoenix … / she outgrew straight lines before I ever learned to describe them / she was an epic hymn sung in rounds worth repeating.