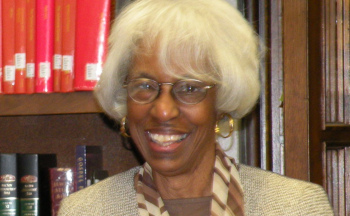 At DDH we knew Eddie Evans Griffin best as a key officer of the Board of Trustees, a mentor to students, and a lover of the Chapel of the Holy Grail. She was a pioneer in several realms. After receiving her bachelor’s degree from what is now Clark Atlanta University, she became the first Black student to enter (and to graduate from) the Master of Social Work program at the University of Illinois. "She took life on," her dear friend Dolores Highbaugh remarked. She died December 21, 2020, after having been in hospice care. She was 85.

Born August 10, 1935 to Myrtle and Lorenzo Evans, Eddie Lo Evans spent her formative years in Indianapolis, where her father, an academic, served as the first African American staff of the National Convocation in Christian education, beginning in 1947. (In 1960-61 he became one of the first group of the merger staff of the NCMC and UCMC.) After graduate school, she married John Griffin and moved to Chicago. He predeceased her. Most of her professional career was at the Chicago Child Care Society. She began as a case worker, working primarily with sexually active teen girls; she served as a field education supervisor for the University of Chicago's School of Social Service Administration. She became a senior administrator with CCCS and retired as Director of the Chicago Comprehensive Care Center.

In 1999, and within a few years after she was first elected to the DDH Board of Trustees, Eddie Griffin became an officer of the board. Her experience as a leader of nonprofit organizations, her commitment to higher and theological education, her mentorship of students, and her knowledge of the church in every manifestation, as well as her wisdom and skill in decisions and processes contributed decisively to the Board’s work. She served on the Executive Committee for twelve years: as Vice President from January 2005 until December 2011, when she stepped down from the board, and as Secretary from 1999 through 2004. She knew the student community well as a regular participant in Monday dinners, programs, chapel services, as well as at Convocation and other special events. She took special pleasure and solace in the Chapel of the Holy Grail.

She was an elder at Park Manor Christian Church and a longtime Sunday school teacher. At Park Manor she was also a chair of the board, sponsor of the college program, chair of the Christian Women’s Fellowship (now Disciples Women), and a member of the Spires Women’s Group. Mrs. Griffin was a leader within the general church and served on the General Board, the Time and Place Committee, and the New Church Start Committee. She wrote meditations for women’s groups. She worked with the Chicago Disciples Union. When she became the Moderator of the Christian Church in Illinois and Wisconsin (CCIW), she was the first Black female to hold that role. During that time, she was also elected Secretary for the Conference of Regional Ministers and Moderators. In 2012, she was recognized as one of three inaugural recipients of the CCIW’s Disciple of Merit award.