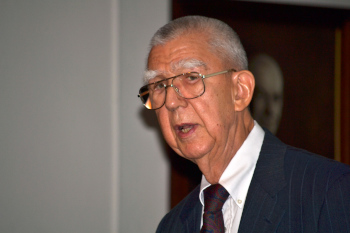 We are saddened to learn of the death of Robert Searle Bates (1950) on December 8 in Indianapolis. He was 92. He capped a lifelong career with Global Ministries by serving as the Area Executive for East Asia and the Pacific. Bob and Sue Bates began their careers as mission co-workers in India in the 1950s. He earned BD, MA, and PhD degrees at the Divinity School as a Disciples Divinity House Scholar.

He was born on September 22, 1928, in Shanghai, China. He attended high school in Connecticut and Pennsylvania. After graduating from Hiram College, he entered the University of Chicago as a Disciples Divinity House Scholar in 1950. He was ordained at University Church in 1953. In 1957, he married Margaret Sue Gillespie, and they went to India as mission co-workers, appointed by the United Christian Missionary Society. They worked alongside student Christian movements in Bangalore and Sri Lanka and taught at Leonard Theological College in in Jabalpur, Madhya Pradesh, India. They returned to the US in 1970. In 1974, he completed his PhD, which focused on Sri Lanka and the Sinhalese-Tamil conflict. They moved to Indianapolis in 1972, where he joined the faculty of Christian Theological Seminary as an assistant professor of Church and Urban Community, serving until 1976. He directed the Survey of Undergraduate Religious Studies in Colleges and Universities of Indiana, before beginning work with the Division of Overseas Ministries of the Christian Church (Disciples of Christ) in 1978. He served DOM as Executive Secretary for the Department of Interpretation and Personnel until 1983, when he became the Executive Secretary of the Department of East Asia and the Pacific of the Division of Overseas Ministries. He retired in 1993.

Bob and Sue Bates were members of Allisonville Christian Church and served in the first group of Regional Elders for the Christian Church in Indiana. He served on the DDH Alumni/ae Council. In 2010, on one of their return trips to DDH, the Bates presented a forum on their 2008 trip to Nanjing, China. Bob Bates’s earliest years were lived in Nanjing, China, where his father, M. Searle Bates, taught history at the University of Nanking. He left Nanjing at age 12 with his mother and brother before Japanese troops invaded China in 1937. His father helped to create the Nanking Safety Zone, which protected thousands of Chinese civilians while bearing witness to the atrocities that resulted in the massacre of 300,000 civilians and the rape of women and girls. Today, the Nanjing Massacre Museum remembers the tragedy and the heroism and courage of the international committee. In 2008, Bob and Sue Bates, with their daughters and grandchildren returned to Nanjing to pray for peace, to celebrate Bob’s 80th birthday, and to visit the museum. Sue Bates died in March 2019. They are survived by daughters Karen Bates Hudson and Kristen Bates-Scott and extended family.