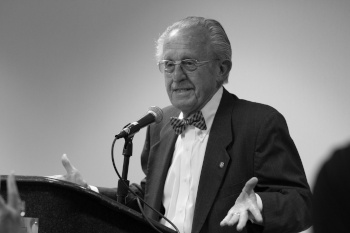 Love of questions brought Clark Williamson to DDH as a student in 1957 and to his pathbreaking work on post-Holocaust theology and against anti-Jewishness in Christian theology. The Barbara and Clark Williamson Scholarship, now fully endowed at $250,000, will recognize "excellence in theological thinking that furthers understanding and accountability between traditions." Friends and family joined with Mr. Williamson and the Board of Trustees on April 24 to inaugurate the scholarship.

The scholarship will be awarded for the first time this fall. It will support future generations of students, including, on occasion, students in the Divinity School from other traditions to make possible their residence and participation in shared life and thought at DDH. It expresses the conviction that thinking critically about faith and about the accountability of Christianity to other faiths is essential for spiritual life and leadership. As Clark has said, “I have come to see that loving questions and loving strangers (who bring their questions with them) is a requirement of Christian faith. Even more, it is a requirement of any authentic spirituality or pastoral leadership. After Auschwitz, unquestioning faith is pernicious.”

When Clark Williamson arrived at the Disciples Divinity House in 1957 from Transylvania College, he thought, “I had finally found a place where I was intellectually and spiritually at home.” He earned BD, MA, and PhD degrees at the University of Chicago Divinity School as a Disciples Divinity House Scholar. He became an architect of post-Holocaust Christian theology, the author of more than twenty books, and the Indiana Professor of Christian Thought at Christian Theological Seminary (now emeritus). Barbara was a student working in the office of the dean of the Divinity School when they met. She earned AB (French) and AM (Linguistics) degrees from the University and taught high school French before serving as executive director of the ACLU in Indiana, in the US Attorney’s Office, and in the Federal Court House in Indianapolis. Barbara Williamson died in 2016. The determination to grow the endowment was further catalyzed when then-MDiv student Rachel Abdoler completed an internship at Congregation Beth El Zedeck in Indianapolis that Clark was instrumental in helping to arrange. He saw the quality of leadership and thought that was possible in a DDH student.

Barbara and Clark Williamson began to build the fund in gratitude for excellence in theological education and scholarship. The endowment was built through their commitment over twenty-two and half years, with a little help from some friends, and completed through Mr. Williamson's magnificent commitment to the 125th Anniversary Campaign. The Board of Trustees acted formally to establish the Barbara and Clark Williamson Scholarship at its April 24 meeting, which was held remotely.

Family and friends of Clark surprised him by joining the Board of Trustees for the formal action. The surprise celebration continued with the announcement of the inaugural recipient of the scholarship: Rachel Abdoler. Rachel Abdoler is now a fourth-year PhD student in the History of Christianity. She studies Christian theological texts written in Arabic against a backdrop of Christian and Islamic polemical writing, and particularly the hermeneutical strategy of Arabophone Christian, Butrus al-Sadamantī, who wrote in a thirteenth-century Copto-Islamic milieu. She spoke movingly, recounting how Clark had been a mentor during her 2014 internship in Indianapolis and dinners shared with Barbara and Clark. In all those ways and more, she explained, she felt as though she had already been a recipient of this scholarship. Her comments were followed by remarks from Rabbi Dennis Sasso, of Congregation Beth El Zedeck, who blessed his dear friend Clark, the memory of the late Barbara, the scholarship, and Rachel, its first recipient.