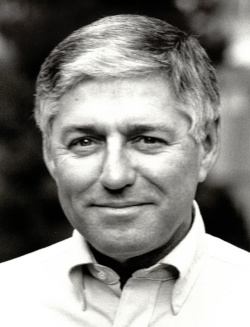 James Ellsworth Stockdale, alumnus, distinguished minister, and longtime trustee, died on October 19. He was 91. A passionate advocate of the Disciples Divinity House, he was the president of DDH’s Alumni/ae Council before being elected to its Board of Trustees in 1985. He served on the board for thirty-four years, including as Vice President and chair of the Development Committee.

Born to Virgil and Catherine Stockdale on August 13, 1930, Jim grew up in Peoria, Illinois, with his younger brother, Tom. He graduated from Bradley University and, in 1952, married Patricia Gibson. They moved to Chicago where Jim earned his BD degree at the University of Chicago Divinity School as a Disciples Divinity House Scholar. His brother followed his path to the Divinity School and DDH, as eventually did Jim and Pat’s youngest son, Jonathan, who earned a PhD.

After Jim’s ordination in 1956, he began a distinguished career in congregational ministry at Orchard Street Church in nearby Blue Island, and then at First Christian Church in Mt. Carmel, Illinois. In 1970, he was called to University Christian Church in Seattle, serving as its Senior Minister until 1994. Under his leadership, the congregation extended its witness of community engagement, inclusion, accessibility, vital intellectual life, and strong support for the arts and ecumenism. When the congregation ceased its common life in 2018, it honored Mr. Stockdale through a magnificent gift to DDH that removed physical barriers and created a stunning and welcoming entrance courtyard.

In retirement, he enjoyed music, theater, and ballet events, taking regular trips to the Oregon coast, and a commitment to his grandchildren that even led to coaching soccer. James E. Stockdale is survived by his wife Pat; their children, Mark, Jennifer, and Jonathan; and their grandchildren, Graham, Catherine, Isaac, Julia, Lennox, Willa, and Theo. He was predeceased by his brother, Thomas V. Stockdale. A memorial service will be held on December 4 in Seattle.