Home / News & Events / A Legacy of Baringers and Butterfields

A Legacy of Baringers and Butterfields 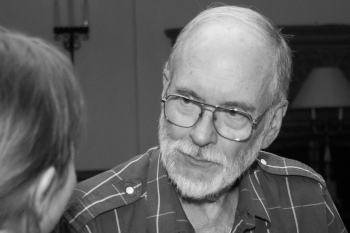 Del Butterfield dedicated his life to making things work and knowing why. The Baringer family, historians by vocation and avocation, knew how consequential individual and communal action could be.

Del Butterfield and Ann Baringer Butterfield prized history, university education, and the Disciples Divinity House. That inspired them to provide for the Baringer Butterfield Fund by establishing a charitable gift annuity through the Christian Church Foundation to benefit DDH. After Del Butterfield’s death this fall, their gift of $109,335 came to DDH. Part of their marvelous gift is the legacy of their names and their lives.

Ann Baringer and her twin sister, Susie, were born in Champaign-Urbana, Illinois, the only children of William and Louise Baringer. When their father accepted a teaching position at Tulane University, the family moved to New Orleans. William E. Baringer was a scholar of Abraham Lincoln whose writing focused on “how we got Lincoln,” as one commentator put it. His first book, Lincoln’s Rise to Power (1937), was hailed as an exhaustive treatment of Lincoln’s swift rise to the presidency and to greatness. He later wrote A House Dividing (1945) and Lincoln’s Vandalia (1949). He served as Executive Director of the Lincoln Sesquicentennial Commission and edited its two-volume, Lincoln Day by Day: A Chronology 1809-1865. During World War II, Louise Baringer, who had a fine voice, was called upon to serve as a cantor for a synagogue. In 1947, the family moved to Florida where Mr. Baringer became a professor at the University of Florida.

Ann and Susie eventually enrolled at the University of Florida as undergraduates. Another student, Del Butterfield, met Ann while he was waiting tables at her sorority. Ann earned her BA in Elementary Education and Del earned his BSE in electrical engineering. They married in 1958. Graduate studies took Del into the rapidly emerging field of nuclear engineering, in which he earned the MSE in 1965.

In 1966, Mr. Butterfield accepted a position with Commonwealth Edison, eventually becoming Director of State Nuclear Programs. Later he became a personnel administrator for Commonwealth Edison. When he began, nuclear power plants were being built rapidly. He later recalled how the fire at the Tennessee Valley Authority’s Brown’s Ferry plant and the later incident at Three Mile Island spurred a significant increase in the safety of the plants. He eventually became a personnel administrator for Commonwealth Edison. The Butterfields raised two children, Lawrence and Susan. Ann Butterfield became the lead interpreter/educator for the Naper Settlement living history museum.

The Butterfields had moved to the Chicago area at the urging of Ann’s sister, Susie, and her husband, Al Boynton. Mr. Boynton, the son of a prominent Disciples minister and the first PhD graduate in nuclear engineering from the University of Florida, worked at the Argonne National Laboratory. Early meetings for the new First Christian Church of Downers Grove were held at Susie and Al Boynton’s home. William E. Crowl, then a third-year Disciples House Scholar, was the founding minister.

It was through the congregation that the Butterfields began their long relationship with the Disciples Divinity House. After DDH Dean W.B. Blakemore served as interim minister at Downers Grove, he invited Del to join the Board of Trustees. Mr. Butterfield would serve as a trustee for thirty-five years and with four DDH deans. He gave invaluable leadership to personnel, facilities, and investment matters.

In 1994, the Butterfields retired to DeSoto, Wisconsin. Del served the village as its president. Later the village named the street where they had lived the “Del Butterfield Honorary Parkway.”

Ann’s parents, William and Louise Baringer died in 2000 and 2004, respectively. Ann’s sister Susie Baringer Boyton also died in 2004 (Al Boynton predeceased her). When Ann Baringer Butterfield died in 2007, she was the last in a line of Baringers.

In 2009, Del remarried; he and his second wife, Lois, eventually relocated to Florida. He remained devoted to his alma mater, the University of Florida. He died on September 28 in Florida. (See the related In Memoriam to Mr. Butterfield.)