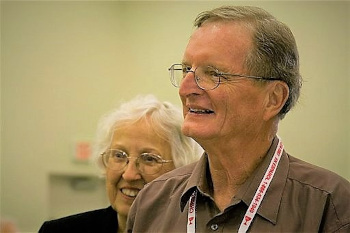 Samuel Campbell Pearson, Jr., entering class of 1951, died on June 10 at home in St. Louis; he was 91. He was Professor Emeritus of Historical Studies at Southern Illinois University at Edwardsville where he taught for many years in addition to serving as Dean of the School of Social Sciences from 1983-95. Mr. Pearson was "a scholar, teacher, administrator, and colleague of uncommon insight, effectiveness, and humanity," as his 2001 Distinguished Alumnus Award from the Disciples Divinity House said.

He was born in Dallas, Texas, on December 10, 1931, the son of Samuel and Edna Pearson. In 1951, after earning his BA cum laude from Texas Christian University and at the age of nineteen, Sam Pearson matriculated to the Divinity School of the University of Chicago and the Disciples Divinity House. He earned the BD and MA degrees, and in 1964, the PhD degree. He held a commission as chaplain in the Navy and served on active duty in from 1954-56. He wrote extensively on the history of Christianity, and received two senior Fulbright appointments to lecture on American History in Chinese universities. After retirement, he again taught in China under the auspices of Global Ministries of the Christian Church and the United Church of Christ, and edited Supporting Asian Christianity's Transition from Mission to Church: A History of the Foundation for Theological Education in South East Asia (2010).

He was an important figure in the life of the Disciples Divinity House and in Disciples higher education. From 1956-60, he was the Assistant to Dean Blakemore and DDH's National Representative. He served on the Alumni/ae Council and the Centennial Planning Committee. He wrote important monographs on the Disciples movement and the Disciples Divinity House. For the Christian Church (Disciples of Christ), he was a member of the Board of the Division of Higher Education (now HELM), a life member of the Disciples of Christ Historical Society, and a member of, and archivist for, the Association of Disciples for Theological Discussion. Union Avenue Christian Church minister and close friend Thomas V. Stockdale once remembered him as "a constant, sometimes frustrated, but relentless voice for every compassionate and enlarging project we undertook."

He is survived by Mary Alice Clay Pearson and their two sons, William Clay Pearson of Gallup, New Mexico, John Andrew Pearson (Pamela Jorden) of Los Angeles. Memorial gifts may be made to the Southern Illinois University at Edwardsville Foundation, Southern Poverty Law Center, or to the Disciples Divinity House of the University of Chicago.